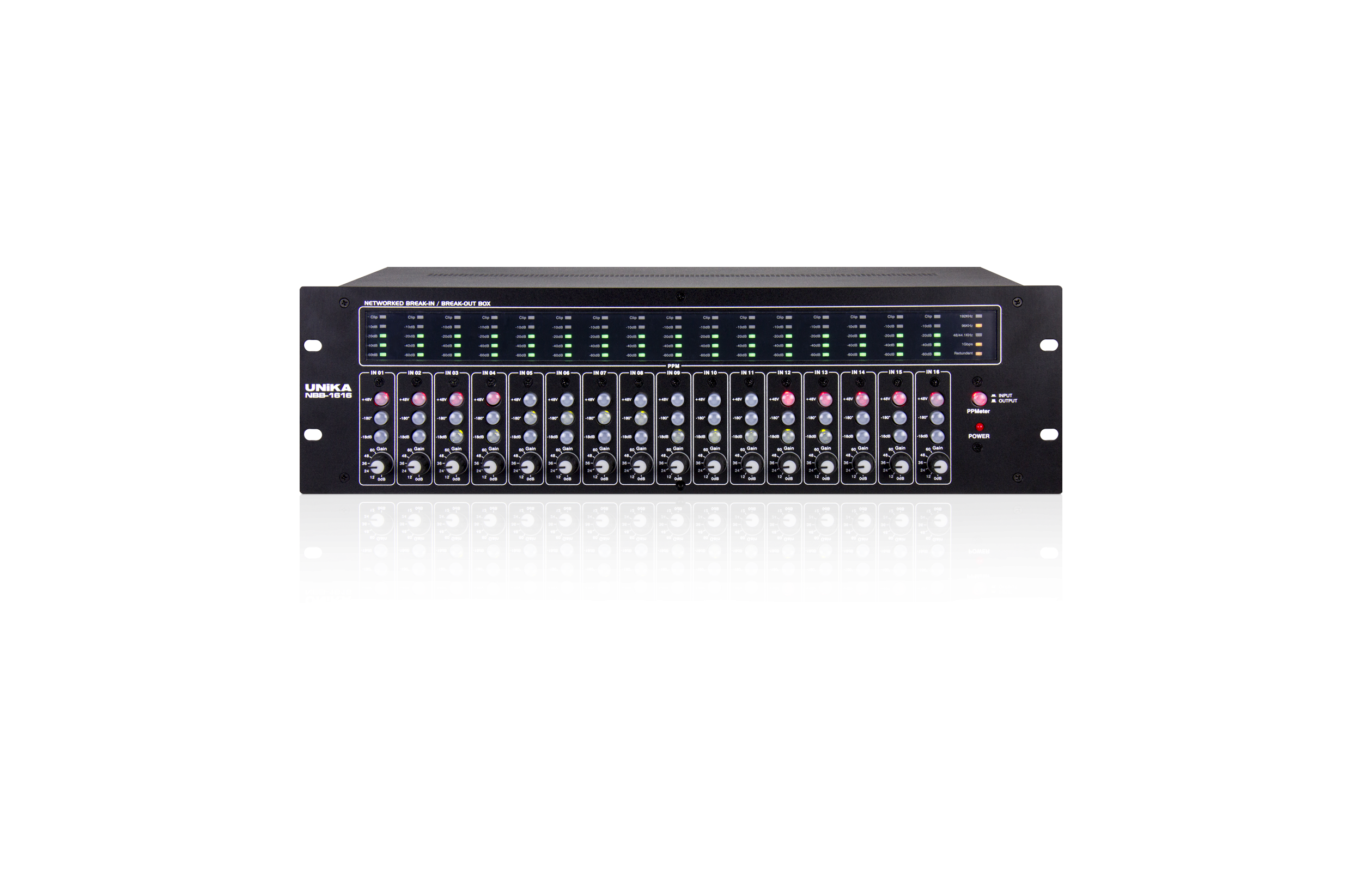 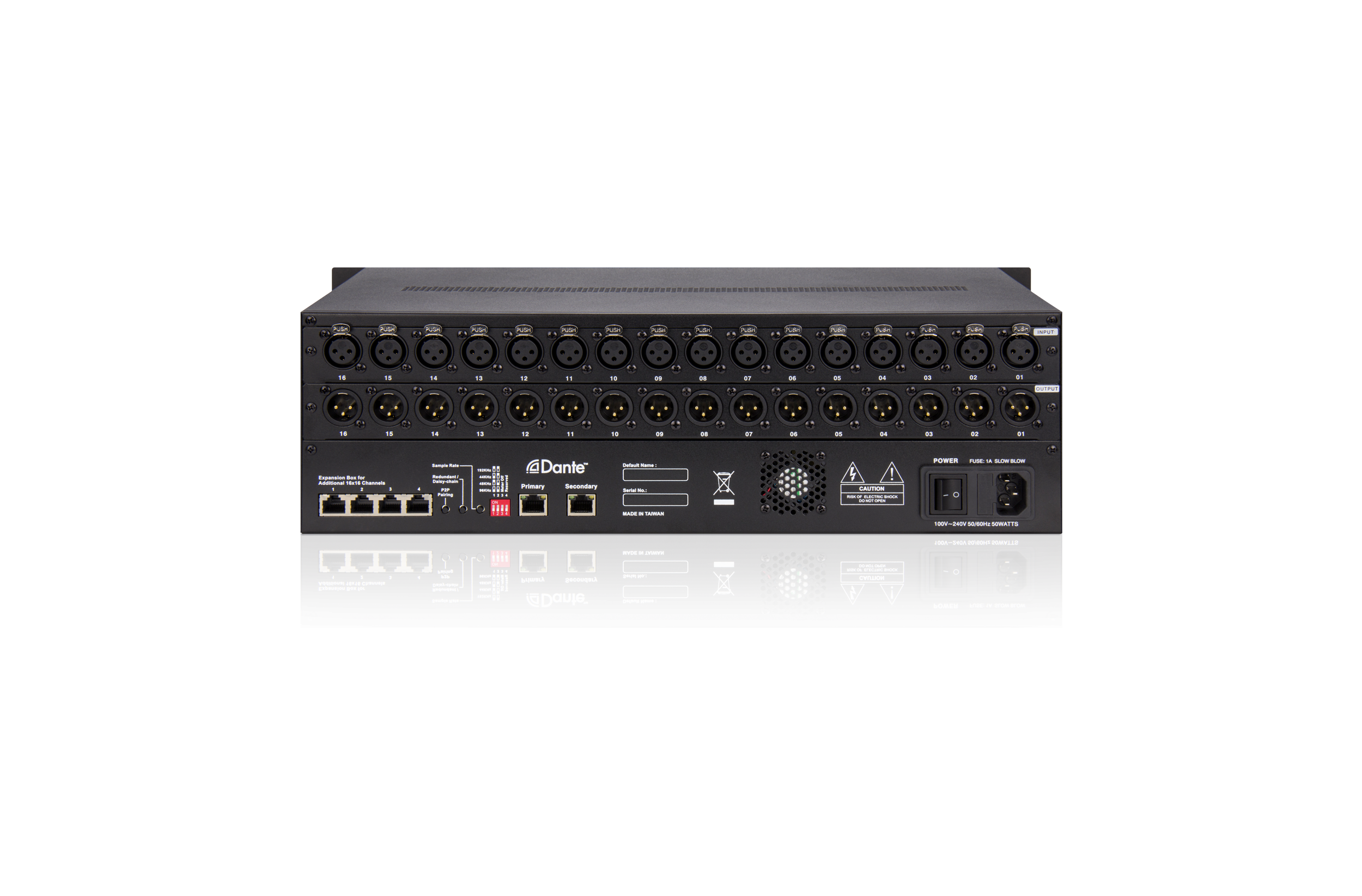 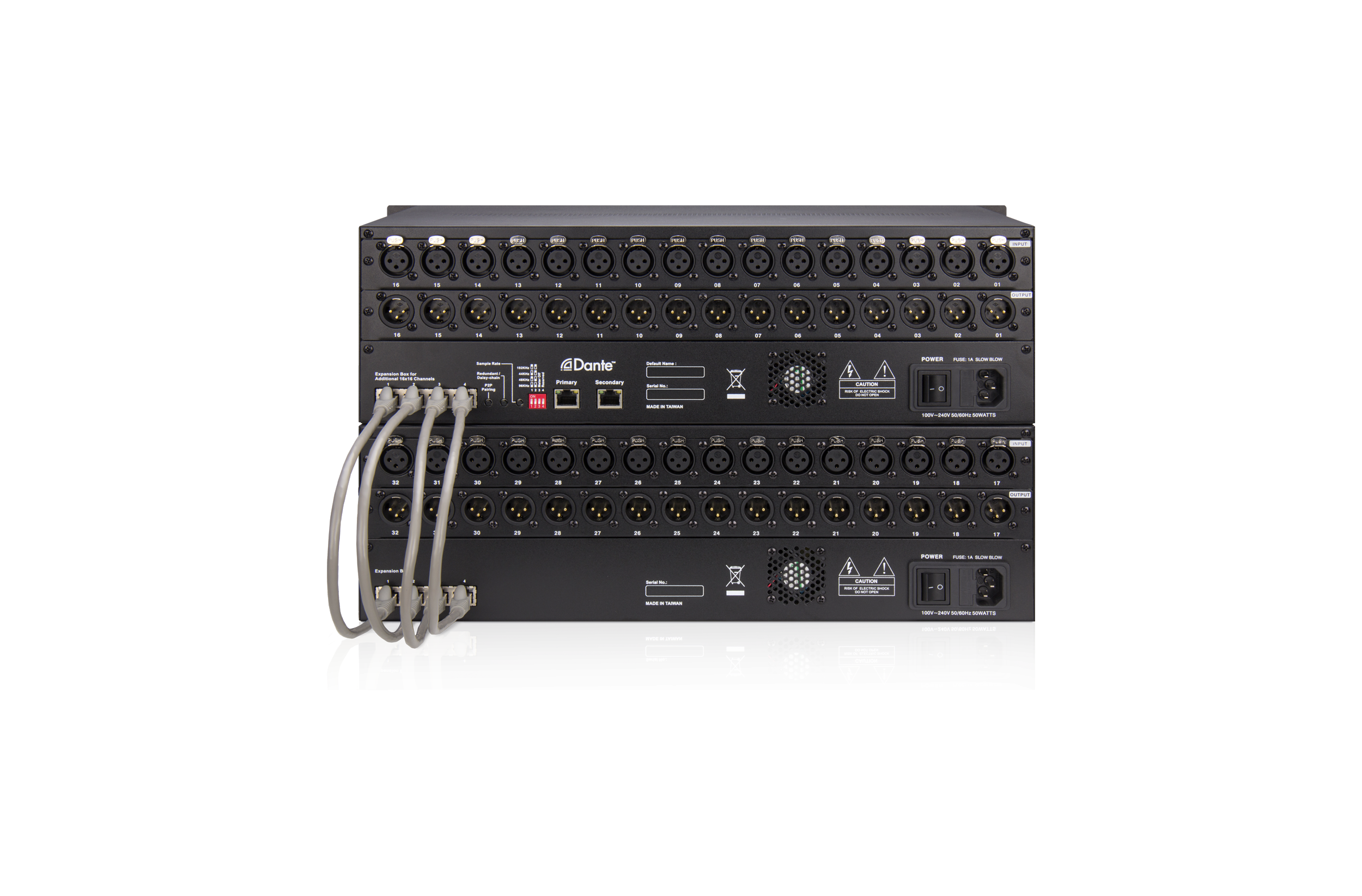 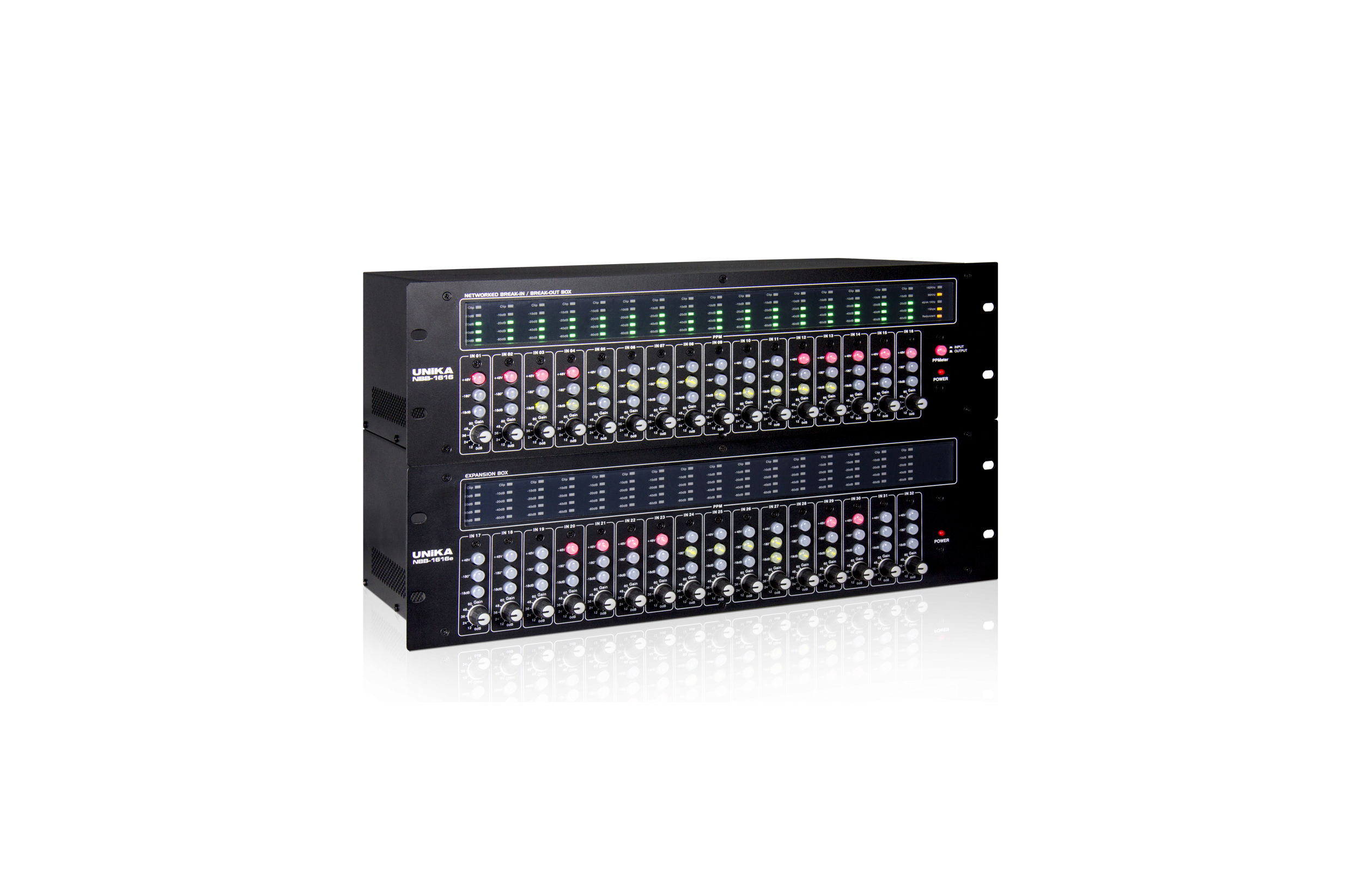 The NBB-1616 is a fully digitized 16 x 16 Break-in/Break-out box which bidirectionally streams multi-channel audio throughout off-the-shelf Ehternet cables and switches.

The NBB-1616 breakbox can be used as a stagebox and direct transceives audio to/from all kind of Dante-enabled audio consoles or DAW workstations in digital domain. With a dedicated P2P Pairing button on rear panel, two NBB-1616s can even be one-to-one paired to work as a digital snake which bidirectionally transceives audio throughout a regular Ethernet cable without the need of audio console or computer involved. All the routing configuration and device setting are automatically saved and preserved upon power recycle.

The NBB-1616 breakbox adopts Audinate Dante networking technology for audio transceiving, and is very network friendly with unlimited flexibility in topology of deployment. It supports up to Layer 3 of IEEE 802.3 network standard, enabling you to organize your audio network with the on-the-shelf Ethernet switches or to immediately transport streaming audio by taking advantage of your existing installated network facility with no hassle. Even better, every NBB-1616 breakbox comes out with two Ethernet ports which allow you to physically cascade several NBB-1616s in the same network link. You can also configure the two Ethernet ports to work independently but parallelly, which means you can redundantly route two links for seamlessly network backing up of each other. This extremely gains flexibility or reliability in device deployment for audio networking.

Audio routing among NBB-1616s and all the Dante-enabled consoles or workstations can be configured via computer with dedicated Dante Controller software which is available free from Audinate website. With Dante Virtual Soundcard software, you are even able to have your DAW software direct record/play multitrack streaming audio from/to NBB-1616 breakbox.

The audio input and output interfaces of NBB-1616 breakbox are fully met the requirement of professional audio industrial. Audio is encoded with the latest and uncompressed 24-bit PCM encoder with sample rate in 48KHz, 96KHz, or even up to 192KHz for extremely exquisite applications. The outputs are peculiarly buffered with amplifiers of high-rail-voltage which can drive the lines up to 24dBu. In addition to the high-level of drive capability on outputs, all inputs of NBB-1616 breakbox accept signal level from mic to line with individual input gain and phantom power control. The NBB-1616 also equipped with 16 PPM meters with clip hold functionality for all the input or output channels. This feature we think it is very important for the audio technicians to simultaneously monitor all the input levels from clipping.

The NBB-1616 breakbox is regularly shipped with channel capacity of 16 analog inputs and 16 analog outputs (i.e., 16 x 16 I/O). However, it is not restricted itself here and you have the option to double the channel capacity for additional 16 x 16 I/O with an expansion box. With the box, you therefore can consolidate totally 32 x 32 audio into the same Ethernet cable.

Furthermore, the NBB-1616 breakbox is firmware upgradeable to support AES67 audio transport in near future.

Two NBB-1616s can be paired to work as a digital snake. Simply connect them with a Ethernet cable and long press the P2P Pairing button on the rear panel of any one the devices, the input and output channels of each device then be automatically and sequentially routed to the other device in one-to-one basis. With expansion box, you can even consolidate 32x32 channels totally to be transceived in a single Ethernet cable.

With the two network ports configured to work in switch mode, you can cascade several NBB-1616s in a same link. This greatly simplifies the network wiring and devices deployment if you need to route audio to several spots sequentially.

For fault tolerant deployment, you can configured the two network ports in NBB-1616 to work in redundant mode. The two separated network links can then backup each other if any one of the links fails for whatever reason.

Since NBB-1616 can stream audio data throughout Ethernet switch, you can deploy your NBB-1616s through switch with minimum of data collision.

Computer network can be further expanded with more than one Ethernet switch, so does NBB-1616 audio network. You can use more than one switch between NBB-1616s to greatly expand your audio distribution.

System Scaling Up with Redundancy

By configuring all the NBB-1616s to work in Redundant mode, you can simultaneously stream your audio to two virtually independent networks to significantly improve fault tolerance.

《The above information is subject to change without notice.》